Quick, Cancel the DJ, Get Ned Instead 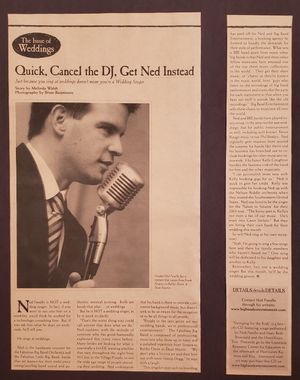 Ned Fasullo is NOT a wedding singer. In fact, if you were to run into him on a weekday, you'd think he worked for a technology consulting firm. But, if you ask him what he does on weekends, he'll tell you.

He sings at weddings.

Ned is the handsome crooner for the Fabulous Big Band Orchestra and the Fabulous Little Big Band that are known for their multi-piece swing/jazz/big band sound and authentic music scoring. Both are bands that play...at weddings.

But he is NOT a wedding singer as he is quick to clarify.

"That's the worst thing you could call anyone that does what we do", Ned explains, with the attitude of someone who has good-humoredly explained this many times before. Many brides are looking for what is essentially a live DJ, wanting playlists that vary throughout the night from 50 Cent, to The Village People, to suit the wide range of people attending their wedding. Ned understands that his band is there to provide consistent background music, but doesn't seek to be an emcee for the reception or to be all things to all people.

"People in the jazz genre are not wedding bands." The Fabulous Big Band is composed of professional musicians who show up in tuxes and a polished repertoire from Sinatra to Bobby Darin to Dean Martin. "We don't play a Sinatra set and then bust out with Snoop Dogg," he says with a laugh.

This singular approach to branding has paid off for Ned and Big Band Entertainment, a booking agency he formed to handle the demands for their style of performance. What sets a BBE band apart from the many other big bands is that Ned and three other fellow musicians have amassed one of the top sheet music collections in the world. They get their sheet music or 'charts' as they're known in the music world, from "guys who listen to old recordings of the big band performances and transcribe the parts for each instrument so that when you hear out stuff it sounds like the old recordings." Big Band Entertainment sells these charts to musicians all over the world.

Ned and BBE bands have played every venue in the area for not just weddings, but for public entertainment as well, including well-known Baton Rouge music venue Phil Brady's. Ned regularly gets requests from around the country for bands like theirs and his business has branched out to include bookings for other musicians nationwide. His fiance' Kelly Creighton handles the business end of the band for him and the other musicians.

"I can accomplish more now with Kelly booking gigs for us." Ned is quick to give her credit. Kelly was responsible for booking Ned with The Nelson Riddle Orchestra when they toured the Southeastern United States. Ned was hired to be the singer for the "Salute to Sinatra" for their 2003 tour. "The funny part is, Kelly's not even a fan of our music. She's more into Gwen Stefani." But they are using their own band for their wedding this month.

So will Ned sing at his own reception?

"Yeah, I'm going to sing a few songs here and there for family members who haven't heard me." One song will be dedicated to his daughter and another to Kelly.

Remember, he's not a wedding singer. But this month he'll be the wedding groom.