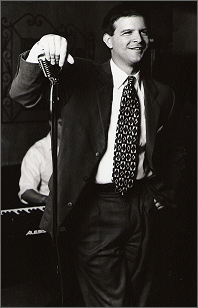 “I decided one day that I wanted to sing, two weeks later I had my first gig,” says Ned Fasullo, Baton Rouge’s ticket to jazz.  “I taught myself by listening to the classics…Frank Sinatra, Dean Martin … they are always in style.”

“Call it jazz, call it swing, call it crooning,” says Ned, who along with the “Fabulous Big Band Orchestra” or the softer quartet, has repeatedly captured the attention of audiences at more than 15 venues in Louisiana since starting out in 1999.

“One of Sinatra’s last wishes made public before his death, was that someone continue his art,” explains Ned.  “It’s my dream to keep this music alive.  I am passionate about big band music, about keeping alive a form of entertainment that many in this generation have never experienced and people from older generations crave … real musicians actually playing all the notes is unfortunately quite rare in this day and age.”

Being one of only a few jazz vocalists in Baton Rouge, Ned “moonlights” every week at hot spots such as Avoyelles on the River and the Fairway View Club.  His Sinatra-like big band style is a natural for many local Italian restaurants, like Vincent’s Italian Restaurant, and DeAngelo’s Restaurant, where great American standards are usually sung with a four piece band comprised of piano, bass, drums and sometimes a guitar or horn.

“The four to seven piece ensemble is just guys I have found here and there, and for the orchestra we add professional horn players from the Baton Rouge Jazz Ensemble.”

His 17-piece “Fabulous Big Band Orchestra” shines in larger venues, such as Casino Rouge, and the University Club as on its four CDs, which covers many mid-50’s titles.

“I’ve begun work on lyrics and melodies for original songs in the big-band style, but will probably not release anything until next year,” Ned says.

“We comprise the vocal jazz scene in Baton Rouge because no one else is doing it,” he adds.

Ned believes that Baton Rouge will be the start of a career that takes him across the country, a successful venture he hopes brings “Pennies From Heaven”.